About a year ago, I remember seeing advertisements for this new series on ESPN about 30 directors creating 30 varying sports stories entitled “ESPN Films 30 for 30“. Needless to say, I waited in joyful anticipation for the release of such a series on DVD.

When the box came with Volume 1, I scanned the titles looking for those that stood out most prominently to me. I distinctly remember relegating some movie about a marching band to the bottom of my watch list. Why watch a movie about a band when there is one about Allen Iverson, one about Reggie Miller, and one about Ricky Williams?

So, about a month after I got them, I finally got around to the bottom of the barrel, and “The Band That Wouldn’t Die” came across my desk. I figured well, might as well give it a shot so I can say I’ve watched them all. I popped it in, and man did I regret waiting as long as I did to watch this movie.

“The Band That Wouldn’t Die” is a documentary that explores the history of the current Balitmore Ravens marching band, now called the Marching Ravens.

Most bands are simply an extended component of their team, almost like a necessary piece of tradition. They are born out of the franchise, and live and breathe by that franchise. However, this band was a breed all its own.

From 1947 to 1950, and then again from 1953 to 1984, the Baltimore Colts franchise was perhaps the most beloved team. in a sports town with little reputation to stand upon, the Colts gave Baltimore a team, their team. And in between New York and Philadelphia to the North and Washington D.C. to the South, some of the most prominent sports towns in the country, the people of Baltimore took pride and rallied behind a team who provided a pretty successful opening decade of action. But spirit reached a new level when a young guy named Johnny Unitas came along in 1957. Behind Unitas, the Colts won back-to-back NFL Championships (pre-Super Bowl era) in ’58 and ’59, and are deemed with helping launch the NFL into fame after the 1958 Championship game against the New York Giants.

From 1947 to 1984 the Baltimore Colts were a staple of Baltimore culture. And yet even through tons of coaches and quarterbacks and players, and furthermore through the period when Baltimore didn’t even have a team from 1950 to 1953, one thing remained constant. Every game the fans and players alike could count on the sounds of the Baltimore Colts’ band from the beginning of the game to the end. They were always there, even when the team was not for that short period from ’50 to ’53. Little did the Colts’ band know that soon, they would become the only reminder of the Colts for the city of Baltimore for some time. 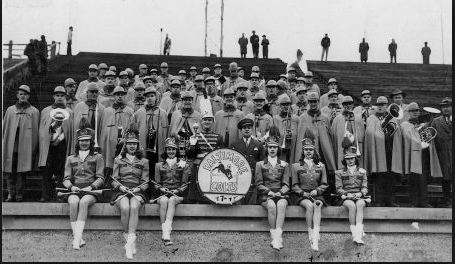 On March 28, 1984, the Baltimore Colts infamously packed into Mayflower moving vans and relocated to Indianapolis to become the Indianapolis Colts (a pithy recollection of the facts of the night can be found here). And yet, the Baltimore Colts’ band stayed. And they would stay, as a remnant of what was and an advocate of what could be. The band marched on, becoming advocates to bring a team back here to Baltimore.

Through tear-filled interviews, and tons of wonderful, authentic Baltimore accents, “The Band That Wouldn’t Die” recollects the story of one of the most important crews in Baltimore sports history. When the Ravens came to twon in 1995, owner Art Modell brought the marching band into the franchise, and renamed them to be the Marching Ravens. Back in their rightful place, the Marching Ravens are recognized as one of the best band corps in the nation, and still have the right and responsibility of performing at halftime to this day.

And those once die-hard Colts fans that composed the Baltimore Colts’ Band have now become the most loyal Ravens fans you’ll ever find. (I’m sure it doesn’t hurt that in their short history, the Ravens franchise has won two Super Bowls, and are current defending World Champions). Even still, some might wonder, how were they able to switch their long-standing allegiance from the Colts to the Ravens?

According to the Marching Ravens members,

you can heal all wounds with a fight song